Born in Bradford and brought up in Halifax, Jordan is six months into an apprenticeship in Mechanical and Electrical Engineering which he started straight from school.

Route into apprenticeship: My dad is a mechanical engineer, so I learned about fixing engines, electrical work and making things from an early age.

Why PPS?: I’d heard about the company from my dad, so I did some research and was interested by what I found out. I had never liked the idea of working in office jobs; I prefer to be hands on, going out and fixing things, so this job fits me perfectly. Even when we are at the company premises in Brighouse, we are in the workshop testing and fixing compressors, rather than sitting at a desk. 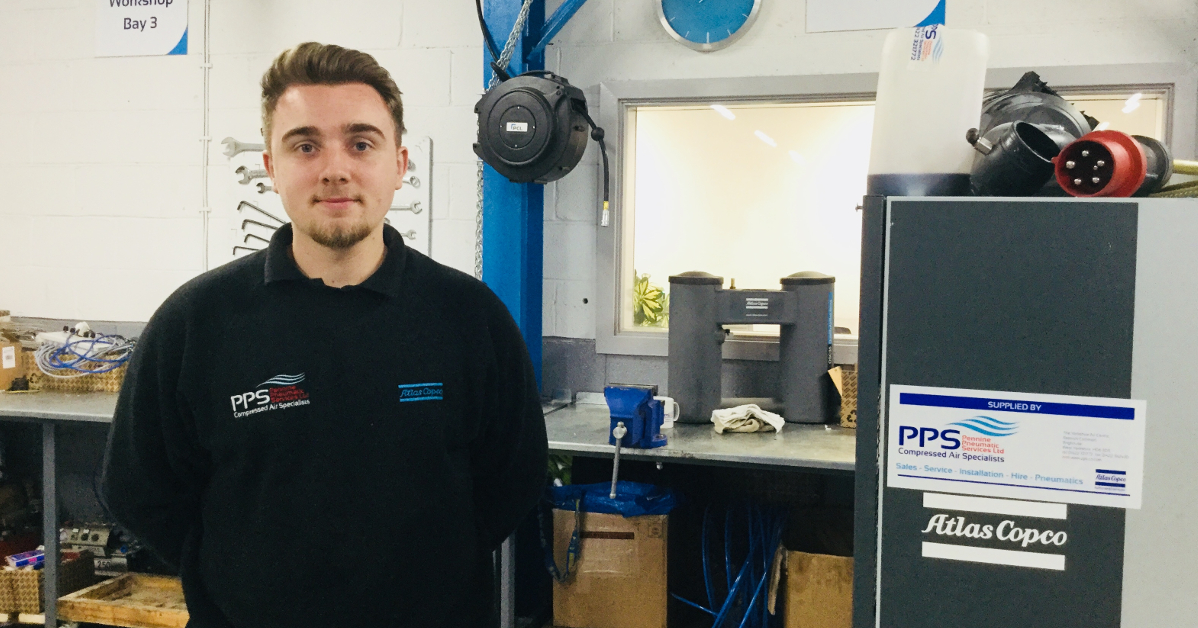 Path of study: I’m currently in the first year of a four-year course. I do one full day at college once a week and the other four days at PPS. There is continual assessment, with coursework and different units that are evaluated. At the end of the year you get a pass or fail, then you have a break from college over the summer but continue working.

At present I’m shadowing one of the electrical engineers at PPS. They like apprentices to be hands on, which is a better way to learn things, in my opinion. If I’d stood back and watched, I wouldn’t have learned as much.

What do you enjoy most about the job?: Every day is different and I particularly enjoy the variety. One day you might be at a medical site, another you’ll be fixing a compressor at a ski slope. I’m working on both servicing and breakdowns – with breakdowns you never know what you’ll get.

What sort of jobs have you been part of?: So far, I’ve helped to carry out four overhauls on large compressors of 90KW or more, which can take up to five hours. An overhaul is typically carried out at 36,000 run hours and most sites have a back-up compressor, although at some you have to have downtime. I’m now experienced enough to carry out services on smaller machines but still need guidance on the larger ones.

What has been the most interesting application you have seen?: They’re all interesting in different ways; I haven’t been to two the same. Recently we went to Xscape, an indoor ski slope in Castleford, which uses compressed air to create snow. It was an interesting job and we got the chance to be shown around.

What has been the most unexpected part of the role?: It was all new to me, to be honest, as I’ve never done anything like this before – but I’m enjoying it a lot.

What’s next for you?: By the end of the year I’ll find out which area they want me to specialise in, either mechanical or electrical. I’d prefer electrical as it’s more complex and challenging – I like to challenge myself.

If this type of role sounds like something you would be interest in doing why not come along to the Appris Engineering Apprenticeship Open Evening on Thursday 7th March. PPS will be there along with other engineering and manufacturing firms from around the region. Register to attend here and we will see you there!