To demonstrate our commitment to the local community and our recognition for the exceptional contribution of the armed forces, PPS recently signed up to the Armed Forces Covenant.

The Armed Forces Covenant promises to ensure that anyone who serves in the armed forces is treated fairly and with respect. This includes veterans and reservists, those who are currently serving in the forces, and the families of military personnel.

By upholding the principles of the Covenant, we are aligning our values with it and pledging to recognise their contribution. This will be achieved in a number of practical ways, from digital promotion and discounts for the armed forces to offering employment opportunities and supporting employees who are in the Reserve forces or are partners/spouses of serving military personnel. You can read more about this commitment here.

Following this pledge, we have now been awarded Bronze in the Defence Employer Recognition Scheme (ERS). PPS are one of just 115 companies to have received this award in the Yorkshire and Humber region. Established by the Ministry of Defence, this is a scheme “to encourage employers to support defence and inspire others to do the same”. 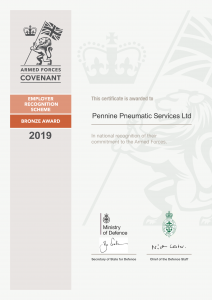 As a Bronze award holder, we have not only signed the Armed Forces Covenant but also issued a statement of intent to support defence personnel and promote our armed forces-friendly status. This includes being open to employing veterans and reservists, cadet instructors and military spouses and partners.

PPS is also now listed as a Bronze award holder on the ERS website.

We are proud to have taken this stance and would encourage other employers to consider taking part in this scheme.