As a West Yorkshire company, we are proud to be part of the local community, and are currently sponsoring Huddersfield Giants rugby league player Alex Mellor through the 2019 season. We caught up with Alex to show him around our Brighouse site and find out about his route into professional sport, his interests and what motivates him. 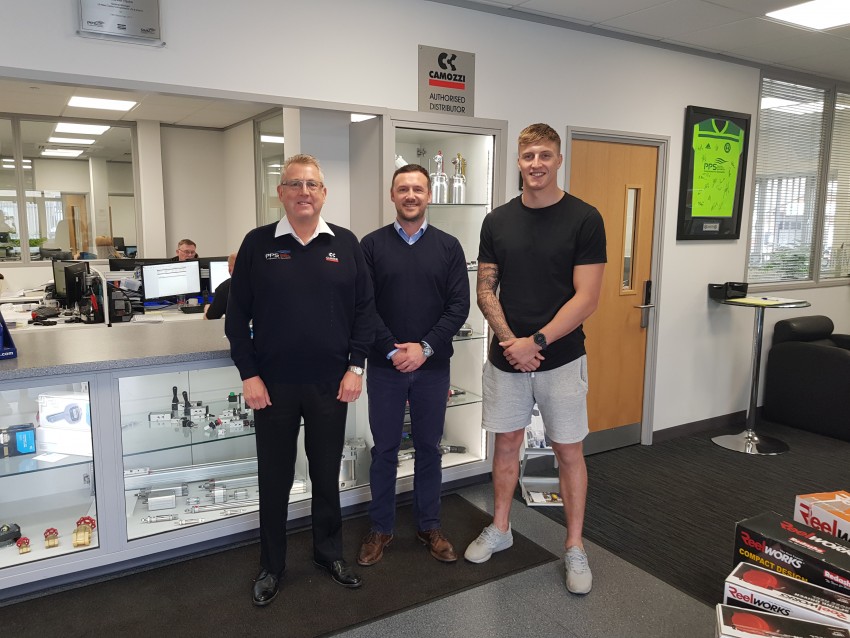 Tell us about your background
I was born in Leeds but moved to Halifax when I was around two years old. Until I was 11, we lived on my grandfather’s farm in Shelf; it wasn’t a working farm, but he rented out some of the fields to farmers and I enjoyed spending a lot of time outdoors. After that, we moved to Northowram.

What first sparked your interest in rugby?
I have always been really sporty, I was into football and had also played a couple of games for Hoyland Vikings rugby club in Elscar, Barnsley. When I was 11, a school friend invited me to come with him to a local rugby club in Halifax, Kings Cross Park, and I played there up to the age of 16.

What was your route into professional rugby?
While I was in the under 14s, I was scouted by the Bradford Bulls and invited on to a scholarship, which lasted for three years until I signed on at the academy at 16. The training was all about learning how your body is going to grow, how to get the best out of it, preparing it to lift weights and move in a certain way – essentially, making you more robust.

What would you be doing if not playing rugby?
I’m currently following an AAT accountancy course through distance learning. You have to be motivated, as when you’ve been training all day it can be hard to get off the couch, open a text book and concentrate on learning to be an accountant. Sometimes I go to a coffee shop to study, as I’ve found a change of scenery helps to motivate you.

My aim is to get my qualification and then start working as an accountant. I want to get my own business up and running before I finish playing, although it takes the pressure off having a wage coming in from my rugby career. I’m 24 now and it’s my seventh year playing professionally. Most rugby players will stop around the age of 35, although some last up to 38. Your body goes through so much every single week and after a while it takes its toll.

What are the key things that motivate you?
Success is a massive one. I really want to win a Grand Final trophy, that’s one of the main motivations for me. Money is another one, as I’m sure it is to most people. I want to be able to provide for my family: my wife and any kids we have in the future.

What has been your career highlight so far?
Probably my first game with Bradford in 2013 and then signing with Huddersfield.

Your charity of choice for your Man of the Match donation was Andys Man Club. Is male mental health something you work to promote?
As I explained in an interview with Sky, my best friend’s dad lost his life last year and the charity helped and supported my friend and his mum. In sport there’s good camaraderie, but it’s a masculine environment and not always the time and place to open up. People might have a smile on their face, but there could be a lot going on behind the scenes, from depression to issues over money or relationships.

How do you mentally prepare for a match and do you have any superstitions?
I’m not very superstitious, but I do like to go out for dinner with my parents at 12 o’clock, before an evening match; it’s something I’ve done for years. Afterwards I’ll sit on a couch and watch TV to take my mind off any nerves. As soon as you get to the ground, it’s not so bad, as you’re able to chat to each other about the game and you get less nervous.

Is there such a thing as a ‘winning mentality’?
Yes, 100%. I think it has been shown that a winning culture is massively important and not just in sport. I talk about having a positive mindset bred into the culture of a team. As soon as you starting thinking negatively, it affects your mindset.

What advice would you give to any young people interested in a sporting career?
Be committed. If you’re not 100% committed, you will fall. I’ve known players with all the ability in the world who’ve made it to 18 and have fallen by the wayside because they weren’t committed, and others who perhaps had less ability but who were successful because they were committed to spending time in the gym and not going out drinking. You have to be a little bit selfish, to invest a lot into yourself and put yourself first so that you are physically and mentally ready to be in the top level of sport. If my friends or family ask me to do something and I have to train, I have to put that first. It’s a sacrifice.

How important is sponsorship for supporting sporting activity?
Sponsors help to make everything tick; without their support, sport wouldn’t be what it is today. Sponsorship brings attention as well as financial help and hopefully works both ways in that the players and the sport can help the company as well.

What did you expect from your visit to PPS and have there been any surprises?
It’s a lot bigger operation than I thought it would be. I didn’t know much about compressed air, how many industries it’s used in or what services you provided. The scale of the operation has impressed me, also how nice the place is and how friendly the staff are.

Finally, who do you rate as the best rugby league player of all time, past or present?
An Australian player, Darren Lockyer. He was one of the people I looked up to when I was first watching rugby. He was such a good player and as the captain of the Australian team he was a good leader as well.

Find out more about Huddersfield Giants.