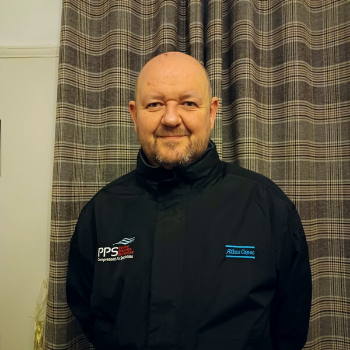 Ian’s involvement in the compressed air industry started at the age of 16, when he left school and took on a role as an apprentice machinist at a compressor manufacturer. He learned how to make compressor parts then later moved over to the assembly side, building compressors for the company to sell.

After spending a year at university and realising it wasn’t for him, he returned to the compressor manufacturer, this time as a Distributor Manager in compressors and spares, looking after the clients who sold the company’s products.

His experience in the compressed air industry further developed when he moved to work for a distributor. Staying there for over 12 years and amassing a wealth of knowledge in both Service Manager and General Manager roles – there is not much Ian doesn’t know about compressors!

Working in the compressed air field Ian got to know PPS and the service team. When the Aftermarket Sales role came up it seemed like the perfect fit and a great new start for a new year.

Ian’s new role at PPS is Aftermarket Sales. “My remit is to look at new service contracts, deal with problems and go to site to come up with solutions,” he explains. “The sales department looks after compressor sales, I go in on the back of this, or at the same time, to offer a service contract.”

Service contracts can be a lifesaver for customers. “They include planned maintenance,” Ian says, “and if anything breaks down the customer is covered under the contract, so there are no surprises and no unforeseen bills.”

Most rewarding part of the job:

“When I first started in the industry, it was interesting finding out how compressors worked. In my later roles, the most rewarding aspect has been customer satisfaction. I particularly enjoy going out to sites and pointing out energy savings that will also save their company money. It’s great to go in and solve a customer’s problems by giving them the correct solution.”

When not at work you’ll find him:

Usually in the kitchen. Ian loves to cook and has a large collection of Michelin Star cookbooks – his signature dish is scallops with cauliflower puree. “I used to get friends round and cook a seven-course meal. Now I just cook for my partner and our two kids – she can relax with glass of wine while I slave away!”

Ian also enjoys walking and used to be an avid Bury FC football fan and season ticket holder. “Sadly the club was liquidated, but the supporters club has bought the football ground from the administrators, so hopefully next season I might be back watching them again.”